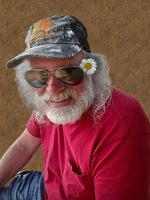 Matthew (Matt) Mertz July 27, 1954 – February 26, 2021. Matt Mertz passed away peacefully at the age of 67 in Mount Pleasant, MI. He was a committed husband; amazing father and father-in-law; doting grandfather; always-there brother; supportive friend; powerful advocate for peace, justice and equity; and an overall caring human being. He told long stories, laughed easily and often, loved to learn new things, kept an open mind but held to his values, spoke up (but not down), made friends effortlessly, and was game for just about anything. He loved family-reunion vacations every summer at Houghton Lake: fishing, swimming, tossing kids in the water, hanging out at the bonfire, catching up with everyone, and chatting about all manner of topics. Making grandkids giggle was always a highlight (no matter how old the grandchild), and he spent many a Thursday taking them to the farmer’s market, the pharmacy for ice cream, and the co-op to “pick up a few things.” Matt never let his limited vision or mobility hold him back from anything he wanted to do – he would always find a way. Although he didn’t realize it, these everyday acts of courage and perseverance served as an inspiration to everyone who knew him. As one granddaughter summed up, “For a man who could not see color, he brought color to so many lives.” Matt served on the Isabella County Human Rights Commission, Handicapped Advisory Board (founding member and vice-chair), Isabella Transportation Commission, and Planning Commission; was a delegate to the Michigan Democratic Party County and State Conventions; won election to constable in Union Township in 1976 (despite the job description, he refused to carry a gun, asking “Do you really want a blind guy carrying a gun?”); volunteered on the Listening Ear Crisis Line; was a founding member and the editor-in-chief of the Central Michigan University underground student newspaper Mountain Rush; continued to write many thought-provoking guest columns and letters to the editor, which appeared in newspapers in Mount Pleasant and around the state; and contributed to the Chicago-based This is Hell radio show. Born in East Detroit (Eastpointe), MI, he is preceded in death by his wife Nancy McKay-Mertz, his parents William and Doris Mertz, and his daughter-in-law Teresa Sutterfield; and is survived by his children, Gerald Sutterfield, Curtis Sutterfield, and Sarah McKay-Mertz (John); his grandchildren Brianna (Brian), Tabitha, Alex, McKinley, Story, Josie and Emmy; siblings Leslie (Steve), Chuck (Laura) and Bill (Angie); and many other family members, friends and fellow community advocates who will miss him greatly. In lieu of flowers, the family requests donations be made to the charity of your choice or to Women’s Aid Services/R.I.S.E. (https://www.riseadvocacy.org/). A memorial service will be scheduled when hugs can once again be shared.

All rights reserved. This obituary is also archived at obittree.com