To share your memory on the wall of Richard Duynslager, sign in using one of the following options:

Print
Duynslager, Richard Joseph, age 71, of Rosebush, passed away Sunday, May 24, 2020, at his cottage in Prudenville.

A Funeral Mass for Richard will be held at Sacred Heart Catholic Church on Tuesday, June 2 at 10 a.m. with Fr. Loren Kalino... Read More
Duynslager, Richard Joseph, age 71, of Rosebush, passed away Sunday, May 24, 2020, at his cottage in Prudenville.

A Funeral Mass for Richard will be held at Sacred Heart Catholic Church on Tuesday, June 2 at 10 a.m. with Fr. Loren Kalinowski officiating. The family will receive friends on Monday from 2-5 and 7-9 p.m. at Clark Family Funeral Chapel and the day of the Mass from 9 a.m. until the time of the service. Those attending the Mass and visitation are asked to wear a mask and maintain an appropriate social distance. In lieu of flowers, plants or trees will be gratefully accepted to be placed around his properties for all to enjoy. Memorial contributions may be made to Our Lady of Hope Catholic Church in Clare and the Stephen Siller Tunnel to Towers Foundation. Envelopes will be available at the funeral chapel and the church.

Family and friends are also invited to join the services via a live broadcast. To do so, please visit the webcasting link at Richard’s Book of Memories at www.clarkfuneralchapel.com or www.facebook.com/clarkfuneralchapel.

Richard was born on February 19, 1949, in Detroit, the son of Harold and Mary (Baach) Duynslager. He married Kathy Blackburn on June 28, 1974. Richard attended Northwestern Michigan College and was then drafted by the U.S. Army. He graduated from the Macomb Police Academy. Richard worked in law enforcement for 37 years. During his career, he held various positions, including youth services, BAYANET, the Armada Police Department, the Clare County Sherriff Department, and eventually retired from the Isabella County Sherriff Department. After retirement, Richard worked for the City of Mt. Pleasant Police Department. He was a member of Our Lady of Hope Parish in Clare, the Clare Council #3029 and the Eagle Club in Weidman #4540. Richard enjoyed boating, fishing, bicycling, hunting, cooking and home projects. He loved spending time with his family and grandchildren.

Richard was preceded in death by his parents.
Read Less

To send flowers to the family or plant a tree in memory of Richard Joseph Duynslager, please visit our Heartfelt Sympathies Store.

Receive notifications about information and event scheduling for Richard

Posted Jun 08, 2020 at 11:54am
I worked with Animal as well at BAYANET. He was an inspiration on what an Officer should be. I learned a lot from him that I tried to carry over through my years with MSP. Last time we spoke to each other was at the BAYANET reunion three years ago. What a great guy. I'll truly miss you Rich.

Posted Jun 03, 2020 at 08:28pm
Rich and I went fishing together and we had a great time, mostly because he was so fun to be around.
I will miss his smile and humor.

Posted Jun 02, 2020 at 12:32pm
My deepest condolences to the entire Duynslager family. I met Rich back in the early 80’s when assigned to the Bayanet Unit. He was one of the finest men and officers I’ve ever had the pleasure of working with. Adios amigo until we all meet again. God Bless you and your loved ones.
Comment Share
Share via: 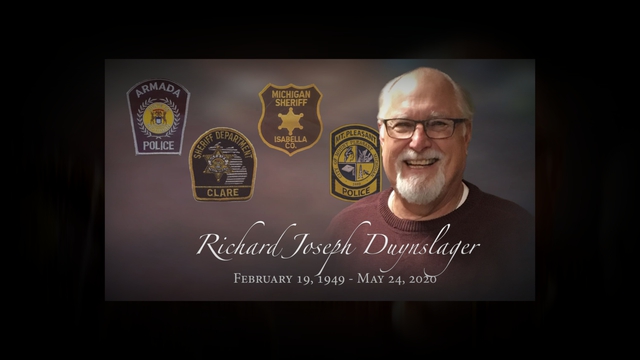